Solar Calculator is an application that calculates the 24 hour energy requirement of a household and based upon that calculates the number of solar panels and batteries required by the solar system. It also calculates the rating of the charge controller and inverter required by the solar system. These are essential components of a solar system. The appliances are grouped together in to five categories namely entertainment, kitchen, air-conditioning, cleaning and lighting. Energy requirement of each category is calculated separately and displayed. The application contains the default wattage of every appliance but the user can also enter a custom value.

A solar panel produces DC voltage which after conditioning by the charge controller is transferred to the batteries operating at 12 V or 24 V. But most of the electrical appliances require 220 volts AC at 50 Hz or 60 Hz. Thus the DC voltage is converted to 220 volts AC by the inverter. The energy storage and conversion processes are lossy in nature and therefore an extra margin must be added to overcome these losses.

Usually the energy storage requirement is calculated based on the assumption that all of the energy is first stored and then used at a later stage. A real system might use some of the energy in real time and this may result in a smaller number of required batteries than calculated. This is also taken care of in the application. 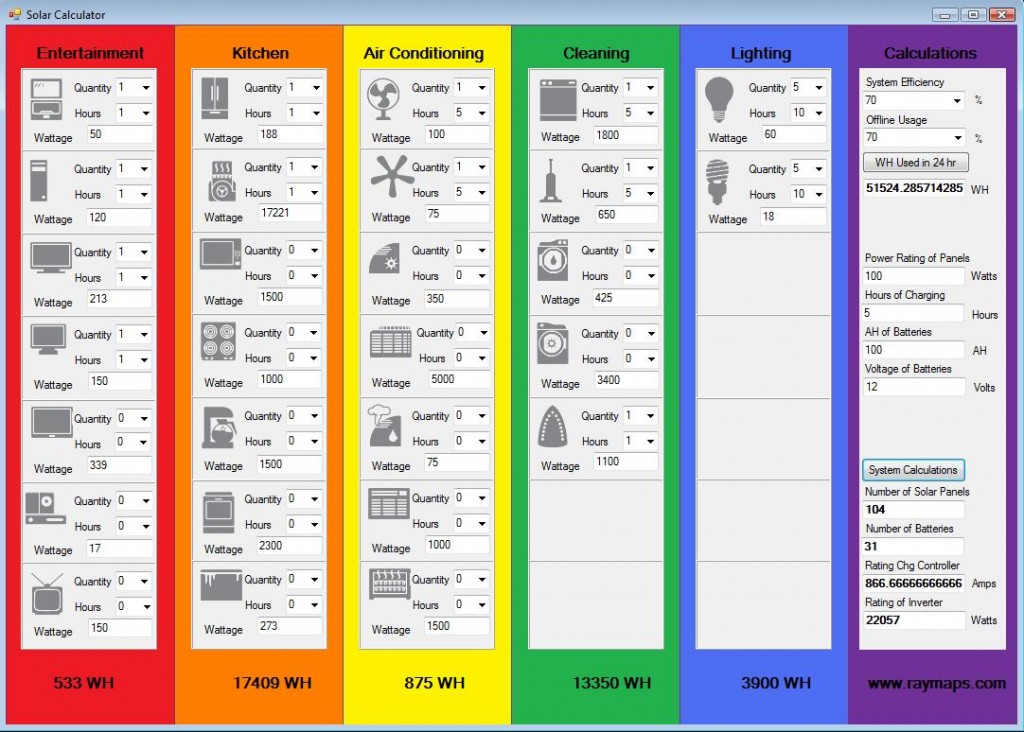 Typically the solar system would receive different amounts of solar energy during a day but we assume a constant amount of energy available throughout the charging hours (user select-able). This can be realistically achieved if the solar system uses a sun tracking device which maneuvers the direction of the solar panels towards the sun.

The hours of charging (peak sun hours) can be estimated by extracting data from 22 year record of flat-panel solar insolation data made available by NASA (0.84 million data points obtained after averging 22 year record). The user simply inputs the latitude and longitude of his location along with the month of interest and program outputs the peak sun hours per day. The hours of charging can also be calculated by using the Half-Sine model. In this model the latitude and day of the year is entered into the program and the output is peak solar hours per day. The Half-Sine model typically over estimates the peak sun hours by as much as 50%.

With these results in hand a system designer can easily go ahead and implement a domestic solar system.

One thought on “Solar Calculator”