There have been conflicting claims about the capacity of Quaid-e-Azam Solar Park (QASP) in the media. While the the chief executive officer of the Quaid-i-Azam Solar Power (Pvt) Limited claims that the project is producing 12% more energy than expected, opposition parties are claiming that it is producing only 18 MW as compared to the advertised capacity of 100 MW. So what is the truth?

Actually both the parties are correct in some sense. While the project does have the capacity of producing 100 MW peak power, this only happens for a very short duration during the day (around noon time). When averaged over 24 hours the park is only producing about 20 MW. This can be easily calculated by assuming that the peak solar energy is available for 5 hours (typical for this region) and average it over 24 hours.

We can also calculate the average power produced by the park by looking at the numbers provided by Quaid-i-Azam Solar Power (Pvt) Limited on its website. According to the website the park is producing 169 Gigawatt Hour as compared to the original estimates of 153 Gigawatt Hour per year (a 12% increase). But this is energy, how do we calculate power?

Cost of Production and Tariff

The good news is that there is very minimal cost of production of solar energy (there was an installation cost of Rs.13 billion plus there are about 700 security personal deployed for the security of 700 Chinese engineers working in the park). The tariff can be easily calculated by the revenue earned and the energy produced. According to QASP sources the revenue reached a peak of Rs. 320 million in September. Lets calculate the cost per unit from the total revenue earned in September and the energy produced in the month of September.

So the QASP claim that it is costing a consumer Rs.12/unit is not true. The actual cost to a consumer is Rs.23.04/unit. Again the data has been taken from QASP website.

There is no doubt that there is going to be a negative impact on the environment. About 500 acres of desert have been taken over by QASP and this will definitely impact the biodiversity of the region. The total area dedicated to this project by Chief Minister of Punjab Mr. Shahbaz Sharif is 6500 acres (near Lal Sohanra National Park). Lastly there are vasts swaths of land in Balochistan which receive about 10-20% more Solar Irradiance than any location in Punjab and there are a number of new and existing Hydel projects that are crying for attention (case in point being Tarbela expansion which can yield additional 1400 MW of power).

The map below shows the solar energy falling on a horizontal surface of area 1 m2 during one year. It can be seen that areas of Balochistan and Southern Sindh are most gifted while Peshawar, Lahore and Islamabad also have quite favorable conditions. Lets assume that we are installing a Solar System in Karachi where the annual irradiation is around 2000 kWhr/m2. This means that there is an average daily irradiation of around 5.5 kWhr/m2. This means that a Solar Panel of area 1 m2 would receive 5.5 kWhr per day or 1 kW for 5.5 hours daily. If the above Solar Panel has an efficiency of 20% we can produce 200 Watts of electrical energy from it for 5.5 hours each day. 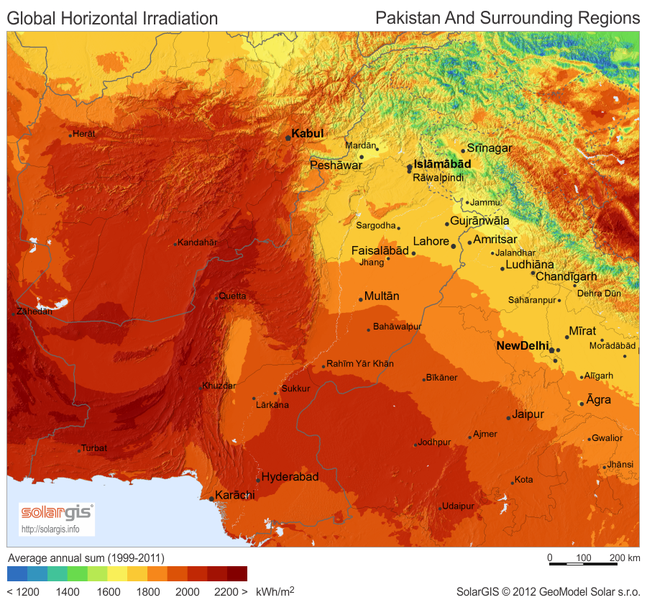 Note:
1. The above map is for energy collected by a horizontal surface. A suitably tilted surface or a tracking one can obtain significantly more energy.

2. The received energy not only depends upon the relative position of the Sun and Earth but also on the atmospheric conditions such as cloud cover during different seasons.